After five years in production, Airdrie’s Torchlight Theatre has closed its doors for good.

“I guess you could say it was a perfect storm of unfortunate events,” says Chelsea Restall, founder and artistic director.

Restall says 2018 was the best year for turnouts for the theatre, but the economic downturn hit hard.

In their third season, they were informed that they would need to relocate from their home in the Airdrie Victory Church. After a year of searching, the theatre group moved to the Polaris Centre for the Performing Arts in September of 2019.

“That happened at the worst time,” she adds.

“We were super optimistic that we’d be able to rebuild our audience base in the coming year. And then it started, we lost three of our major sponsors who had been with us from the beginning, and then at about the same time COVID hit and we were forced to shut down our Spring production (The Rainmaker).”

She says the pandemic caused them to cancel a fundraiser scheduled for March 21 as well as their SPARK Youth Program classes that were expected to bring in money for the upcoming season.

Restall says although closing the theatre is heartbreaking, she is incredibly grateful for the connections and relationships she made along the way.

“Speaking personally, I have been absolutely blessed by the amazing people that I have had the opportunity to work with: the artists, designers, technicians, volunteers, students and audience members,” she adds.

She added that the SPARK program, which started in 2015 with only 14 students, created lasting connections with local youth that will last for years to come.

“I’ve had many of the students come back to me and say that they found ‘their people’ through the SPARK Youth Program,” she says.

“I used to marvel when I’d stop in at the classes and see how everyone was included.” 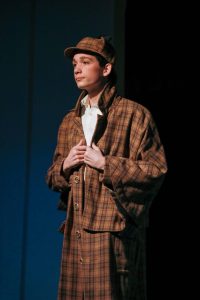 She says she would estimate that about 100 students came through the program in the past five years and a number went on to college or university level.

“We created a place for the community to come together and have a collective experience,” she says.

“People might not know it, but behind the scenes, Torchlight was never about the productions, it was always about the people. We wanted the audience to have an amazing night of theatre, the artists to have a great creative outlet and the students to be saturated with possibilities.”

She added that the biggest lesson she learned from the experience was that with a lot of hard work and some sacrifice, anything is possible.

“If you think something is impossible, or too big, or just a ‘pie in the sky’ dream, think again!” she adds.

“There is so much amazing art happening right in our backyard.”

Ten Ways To Give This Christmas Season

‘Tis the season, as the saying goes, when many people start thinking about how they can give to others less fortunate. Following are a few Airdrie organizations that could use your support both this Christmas and beyond.

The Spring-cleaning checklist you didn’t know about

It’s time to start thinking about giving the house and yard a thorough cleaning. We have come up with a few odd jobs that you may not think about but can really freshen up your space.

This November, Genesis Place Recreation Centre will launch a free, inclusive program for children with autism and sensory sensitivities.