The Colour Of Emotion

“Every brush stroke has a purpose, every colour a meaning” – Verone Solilo

“People think you just slap colour down on canvas, but it’s much more than that,” says Airdrie artist Verone Solilo. “Every brushstroke has a purpose, every colour a meaning.”

Solilo and her husband moved from Saskatchewan two years ago to be near family and, of course, her easel and brushes followed.

“I’ve been doing this a long time, since I was really little,” Solilo, who is 62, explains.

However, because she was busy raising a family, and working as a playschool teacher and then a coffee shop owner, painting was always something she did on the side.

Five years ago, the purpose of her art took on a new meaning after her family experienced a tragedy.

“Until then, I was always a careful painter, very quiet, very water colour-ish, always worrying about what people thought,” she admits. Solilo’s art is anything but quiet.

Her style is reminiscent of the Group of Seven’s Tom Thomson or of French impressionist Claude Monet.

Her paintings, in either acrylic or watercolour, erupt off the canvas in energetic brush strokes with splashes of brilliance and movement, sometimes abstract or more realistic, insinuating but not entirely describing what she imagines. It was the family tragedy that released this, says Solilo, because it taught her that life is too short to worry about what people think.

But the intense emotion she was feeling soon began pouring out.

One evening, angry and unable to sleep, she sat at her easel and began to paint a scene of ocean waves.

But the intense emotion she was feeling soon began pouring out.

The result was the most moving piece she had ever put to canvas.

“Now, I paint with my emotions. I no longer care what people think about my work.”

It has been freeing, she explains, but her images are not dark.

“I don’t like stories that have a sad ending, and I don’t like painting to make people feel sad,” she explains.

“There’s a lot of sorrow in the world, but there’s also a lot of joy and wonder. That’s what came out of that night.”

Solilo is becoming known in her adopted community, participating in art shows and in the Voice and Vision Collaboration.

People connect with her art, she says, and often tell her how it affects them. “It’s so amazing to be able to do something that brings joy into someone’s life.” 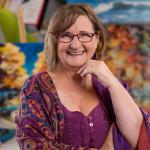 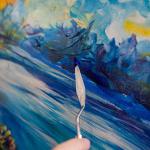 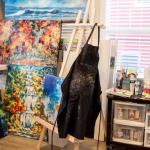 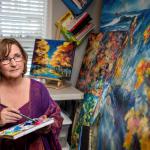 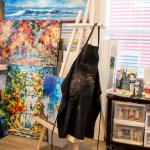 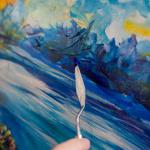 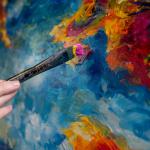 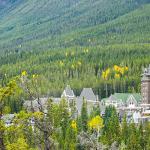 For the love of weaving

Learn how to wear this season's trends with Seven Saints co-owner, Erin Hardy!

10 QUESTIONS: Essential knowledge when hiring a trainer or walker for your dog

Your puppy or dog needs the same care and duty you would give a child when researching care. Why? Because your companion animal is voiceless, trusting and, therefore, vulnerable. Luckily, Airdrie is rich in certified dog trainers and qualified walkers.