Everything follows the pipe

“Everything follows the pipe”

Métis Elder Pamela Lashmore is unequivocal about the traditional Indigenous path to reconciliation and understanding after a pipe and teepee raising ceremony held at Airdrie City Hall March 21.

“We conduct the pipe ceremony in honour of our elders and our grandfathers,” explains Lashmore, who grew up in Airdrie. “The ceremony – which is never photographed, out of respect – traditionally takes place in a teepee, with offerings of prayers, singing and dancing. A teepee was raised and taken down the same day in front of city hall, just for this occasion.” 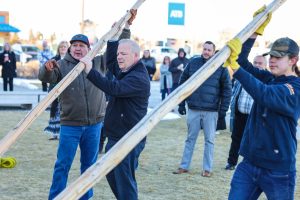 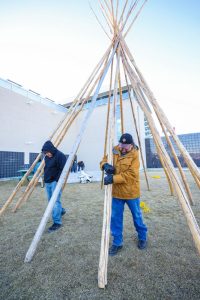 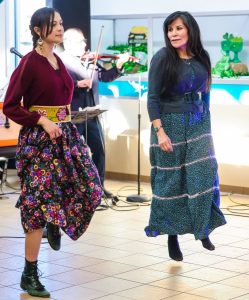 “We consulted several people: senior leadership, past volunteers, community leaders and Indigenous Elders about how to proceed. There were so many prayers offered to ensure our goal of building relationships was done properly, opening dialogue with the Spirit world.”

The team met with the Elders of the Stoney Nakoda First Nation in Morley, who enthusiastically agreed to be a part of this tradition.

“They provided the pipe, the pipe carriers and helpers. Staff and council participated in the actual raising of the teepee. We showcased traditional dancing and singing. We celebrated the sharing of bannock with staff and residents during the day and approximately 60 people were able to attend. It was a wonderful sharing of culture and experience.”

Lutz explains this special ceremony was the first opportunity to introduce a rich, tangible commitment to truth and reconciliation.

Lashmore couldn’t be happier with the outcome.

“What seems fast-tracked, has actually been in the works for the last 20 years.” Lashmore laughs at the irony. “Pipe ceremonies are traditionally simple, but extremely important. They are usually lengthy, interspersed with prayer, singing and dancing. We started here by giving protocol offerings to the Elders, of tobacco, ribbons and cloth. It is imperative that a pipe ceremony align with the Seven Sacred Teachings, and we take care to ensure that occurs.”

A resident of Water Valley now, Lashmore recalls her Airdrie childhood and youth.

“Airdrie was a wonderful place to grow up. School, sports, work. And it was so small! I remember when there was only one main road through town.”

She has no recollection of any racism growing up.

Lashmore’s goal in life has been to honour both her First Nations and European heritage.

“I’m a descendant of both,” she says, “and I’m called to live accordingly. Not everyone necessarily agrees with that.”

She has since become an influential cultural teacher, and consultant across the country. As Resident Elder, Lashmore spends one day a week in the community, working with Airdrie’s community development team, and new culture and heritage advisor.

“I feel fortunate to be a part of bringing cultural awareness of our traditions to my hometown. I would love for Airdrie to be an integral part of our Indigenous culture, recognizing and celebrating our deep Métis roots here.”

“We have many activities planned,” says Lutz. “We are collaborating with the Stoney Nakoda First Nation and will definitely be repeating the tradition of the teepee raising, so that everyone will get the chance to see it. We will offer Indigenous dancing and singing. We will also be providing traditional cultural information and education. We are also very pleased the Stoney Elders will also be in attendance for this special day.”

More information on times and activities is available at airdrie.ca.

Here we are 4,900 pages into celebrating life in Airdrie….

Airdrie Board of Youth Affairs

In a constantly evolving world, one with abundant choices and no definitive direction, any one of us can feel lost or that we’ve irreversibly changed our future

Female hockey is flourishing in Airdrie.