Aaron Dell is the epitome of perseverance.

The pro hockey goalie became the first local keeper to play an NHL game when he hit the ice with the San Jose Sharks in a 3-2 road win over the New York Islanders in October 2016.

Having made the journey successfully, his message to aspiring young hockey players is optimistic.

“I think the thing you can take out of it is that it can be done,” said Dell in June while sitting on the players’ bench in the Ron Ebbesen Arena, where he grew up playing. “It’s got to be your dream, and you’ve got to stick with it all the way even [though] sometimes there’s going to be ups and downs.”

Stick with it, he says.

That’s a little gem he’s kept in his mind since after his first year in the Central Hockey League (CHL) with the Allen Americans. It was the summer of 2013 while training in Calgary when he asked veteran pro goalie Jason LaBarbera for one piece of advice.

“He said, ‘Stick with it.’ I’ve always remembered that because it was such a simple thing,” said Dell.

The now 28-year-old netminder did much to prove himself as a backup to Sharks’ Martin Jones in his rookie season last winter.

Dell tallied numbers rivaling Vezina Trophy-winner Sergei Bobrovsky of the Columbus Blue Jackets, but in one-quarter of the games against arguably lower-ranked teams.

Dell’s 2.0 goals against average was .06 lower than the Vezina winner, and he was tied with Bobrovsky’s .931 save percentage in his 20 games and 17 starts. Dell earned 11 wins and six losses, which included highlight reel saves and a shutout.

“Of course everyone’s dream is to be the superstar, starting goalie,” said Dell. “I’m just happy to be here right now, and my job as the backup is to let Jonesy get a rest here and there and to give the team a chance to win in those games that he’s not in.”

Not only the first Airdrie goalie to break into an NHL roster, Dell is also the first Heritage Junior Hockey League goalie to ever perform the feat.

He helped the Junior B Airdrie Thunder lead the division a decade ago as a 17-year-old. His next rung in the tall ladder to the NHL was with the Calgary Canucks in the Alberta Junior Hockey League (2007-2009).

Then came three seasons with the University of North Dakota (UND) where he topped NHL legend Ed Belfour’s win record for the university, notching 30 wins in 2011.

With three-quarters of a college degree under his belt in recreational and tourism studies, Dell pursued his pro hockey dream.

He entered the pro ranks shortly after marrying his wife Kelly, whom he met at UND. After a late elimination from the ECHL’s Colorado Eagles fall camp in 2012, Belfour connected Dell with a last-minute opportunity to play with the Allen Americans in the Central Hockey League.

Dell then backstopped the ECHL’s Utah Grizzlies and the American Hockey League’s (AHL) Abbotsford Heat part of the 2013-2014 season and spent most of 2014-2015 competing with the AHL’s Worcester Sharks, plus some games down a rung with Allen.

All the while he was making far from big-league paycheques, recalling he made about $20,000 in Allen and was bumped up to almost $30,000 the following year before he signed for $47,000 in Worcester.

“It’s not always going to be easy,” said Dell. “I think the most part is taking advantage of the chances you get, because they don’t come all the time.”

Having realized the first part of his NHL dream, he said it’s an even more elaborate lifestyle than he imagined.

“I think it might have been a little bit more than I dreamed about,” said Dell, noting private team jets and dinners with the club at high-end restaurants.

The four years of bouncing around the minor leagues and “20-hour bus rides from Allen to Arizona” have left him thankful for his current standing.

“Going through all of the other things made me appreciate the good things that I do get,” said Dell.

He paints playing with the Sharks with the key word exactly as one would hope – fun.

“I have fun playing and when it’s fun, you kind of forget about the pressures,” said Dell. “You get to just do what you do.”

He also gets to be teammates with “once-in-a-lifetime characters” like the big-bearded veteran centre Joe Thornton and Norris Trophy-winning defenceman Brent Burns.

In the summers, he and Kelly return to Airdrie to be closer to his parents Phil and Laurie. The familial bond is a value he wears on his right arm in a tattoo of wolves, symbolizing loyalty and family.

The great horned owl on his right forearm represents wisdom and perseverance, traits to which he aspires, and embodies. A maple tree, symbolizing his home nation, surrounds the owl, the provincial bird of Alberta.

“It’s got to be your dream, and you’ve got to stick with it all the way even [though] sometimes there’s going to be ups and downs”

Dell is happy to have paved the way for other goalies with big-league dreams from his hometown of Airdrie, where he moved to from Calgary in his youth.

“It’s kind of a cool experience to be the first one and hopefully there’s some more on the way.” 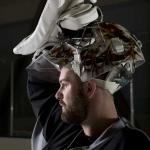 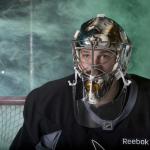 2018 Awards of Community Excellence. With illustrations by Lia Golemba we salute Airdrians who go above and beyond and make us proud!

Meet our writers and photographers from the summer issue

Meet our writers and photographers from the summer issue. We love meeting with and photographing community people and business owners. Airdrie is a very unique, small town and a great place to call home. We loved getting to know Liam and Graham; such talented, responsible young men.