Airdrie’s midget AA female hockey players are proving to be strong contenders in their second season.

The Airdrie Lightning, which is made up of 15- to 17-year-old players, reportedly had the youngest average-age roster to join the restructured Alberta Female Hockey League’s Midget Elite AA division in the fall of 2016 with eight first-year midget players. They finished with a reasonable 11-win, 15-loss record, but were bumped out in the first round of playoffs.

“This year when we score, it’s like, ‘Alright, I want more”

This season, the squad is a contender for first place in the south half of the league.

“This year when we score, it’s like, ‘Alright, I want more,’” says Sarah Nusl, a right winger from Cochrane.

In this December interview with airdrielife, Nusl is joined by her second-year teammates Madelyn Schulze, Madison Black and Emma Hoppins, sitting closely around a table in the lobby at the Ron Ebbesen Arena before practice.

The round-table interview has a similar flow to the girls’ play on the ice. Set up, pass, goal and assist.

“We’re all cohesive,” says Schulze, a defenceman from Airdrie.

“We just roll the lines easily,” chimes in Nusl, noting the even strength of all three lines. “Even if we have the D playing forward, they all have the hockey sense, and they can all do everything.”

Emma, whose father Ray Hoppins is the head coach, says every skater on the roster had a goal, an unmatched feat in the league at the time.

“We all recognize we’re all good hockey players,” says the left winger from Olds and linemate with Black.

The girls often faced-off against each other throughout their earlier minor hockey years playing in and around their hometowns of Airdrie, Cochrane, Olds, Crossfield, Cremona, Didsbury and Bowden.

Those memories of seeing each other at the other end of the ice are fresh enough to be remembered, but the girls laugh as they open up about the respect they had for one another then and now.

“When we played, I was like ‘Sarah Nusl, she’s so good. I hate playing Sarah,’” says Emma.

As the girls head off to get ready for practice, coach Hoppins says he attributes the girls’ success to simply working on scoring in practice by breaking down technical aspects and working on team and individual strategies.

A vast majority of players returned from 2016-2017, and Ray says many of the girls could play AAA.

He also tips his hat to strong play from the Lightning’s two new goalies, starter Cianna Weir and backup Kayla Savoie-Penton. Savoie-Penton is based in Airdrie and played with the Banff Hockey Academy last season, while Weir is from Olds and travelled to Lloydminster to play in the Elite league last year.

“Both goalies have bailed us out of frantic play,” says coach Hoppins.

Weir was leading the league with 11 wins late in January, while holding a .92 save percentage (SV%) and 2.18 goals against average (GAA).

Backup Savoie-Penton only started in one game, a loss to the South division-leading Calgary Fire Red.

Ray says he has taken note of the transformation from opponent to comrade.

They’ve taken steps to form friendships, which Schulze says gives them an edge.

“I think as a team because we’re all close it helps us connect better when we’re on the ice,” she says, noting it’s an accomplishment the girls are so tight, as hardly any go to the same schools, being from different centres.

Notably, the midget team, in partnership with an atom girls squad, fundraised turkeys for families in need to have for Christmas, donating a whopping 236 turkeys to Airdrie Food Bank.

“It’s just a fun team to play on,” says Schulze. 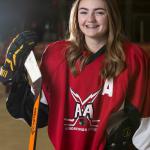 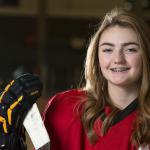 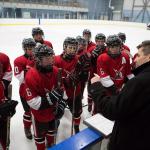 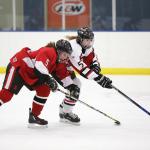 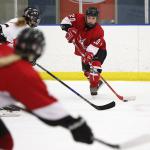 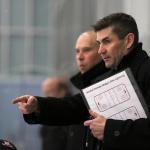 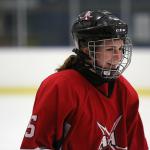 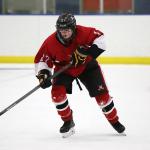 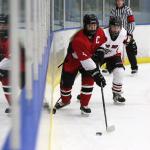 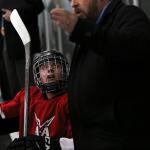 Through the teenage lens

Similar to its moniker, Extreme flag football may sound intense, but this version of the North American game is built to safely introduce youngsters to the pleasure of the pigskin.