A prominent Calgary homebuilder is leveraging the existence of an impressive park in Airdrie to create an exciting new residential community.

“One of the main reasons Brookfield wanted to get involved in the city of Airdrie and the site was really focused around creating a great place for families and individuals. People to connect. Not only with each other, not only with their neighbours and with their friends, but also with the city in general. The conduit to that is Chinook Winds Park,” says Castelino.

“It’s a fantastic amenity that the City of Airdrie has built there and we really saw a great opportunity to really leverage that park to create a sense of belonging in southwest Airdrie.”

Chinook Gate will be located just south of Yankee Valley Boulevard and on the west side of Chinook Winds Park.

The development encompasses 113 acres and will have just under 800 homes in the neighbourhood. There will be townhomes, duplexes, laned homes and move-up homes.

“It’s a pretty full-serve product mix. Construction on homes will start this winter. Showhomes will be opening somewhere around the end of March, beginning of April. Our first customers will be moving in right around the same timeframe,” says Castelino.

“We’re about a five- to seven-year build out.”

There will not be any commercial development at Chinook Gate but there will be about 11 acres of green space for two park sites as well as a pond and a pathway. Land is also dedicated for a future school.

“Airdrie as a city has great energy. A very entrepreneurial spirit. Really kind of the embodiment of the Alberta work ethic. It’s hard working. The drive to succeed there is strong,” says Castelino.

“The market itself in terms of housing is actually out-performing most Alberta municipalities even through a bit of a slowdown over the last few years. There’s still a very strong housing market there. I think it ties back to that entrepreneurial spirit in the city and really an energy people want to be part of, and Brookfield wants to be part of, too.” 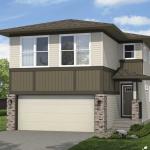 The BILD Awards celebrate and recognize the building and development industry’s best in Calgary and area. This year Airdrie-based Harder Homes won two awards in the Single Home category.

Demand in the Airdrie market has surged relative to longer-term averages but significant need for new inventory levels has been the story for the first quarter of 2022.

DUE DILIGENCE MATTERS IN THIS MARKET

WHAT A JOURNEY SO FAR in the first three quarters of 2022! Airdrie has seen more than 660 sales in the past three months alone! It’s been consistent for Airdrie to have an average of 50 conditional sales at any given day over the past few weeks.