In the world of competitive cheerleading, all that separates you from success on the mat is two and a half minutes.

The cheer season runs from September to April, with practices that include stunting, tumbling, dance and jumps.

Along with that comes blood, sweat, and more than a few tears.

But for the George McDougall High School Division 1 small squad, it’s all worth it.

“Last year we started with very few veterans on the team,” says head coach Liese Reichert. “We started with 10 girls but two left due to illness.”

With the remaining eight girls, Reichert saw a number of factors contribute to the squad’s remarkable season.

First and foremost, Reichert says that attitude was everything.

“Every one of them tried to build the others up. It was an ‘all-in-this-together’ mentality.”

Hope Warthe, former squad member and now assistant coach, attributes positivity to not only the team’s success but also to making the team.

“If you can’t do something, don’t quit; don’t be afraid to try,” says Warthe. “It’s hard but rewarding in the end.”

Another key factor in the GMAC cheer team’s success is their ability to help and support one another.

“I was on the middle school team for a year, and when I came here and learned that some of the moves I was doing were wrong, the team really came together to help.”

“I like being with a team because we all (work) together, we (are) able to give feedback, and our drives to competitions (are) hilarious,” adds Chowhan.

With all of their hours put in, the GMAC cheer squad has a lot to be proud of. The athletes attended six competitions in total last season which including showings at Northlands in Edmonton and Stampede City Showdown in Calgary.

The big win came during Zones in Lethbridge where they placed first in their division.

Finally, at provincials, the GMAC cheer squad was tenths of a point away from a second-place finish.

“It was a strong routine, a good routine, and the group of girls [was] bound and determined to make the season successful no matter what,” says Reichert.

This year, there are 11 girls on the team.

“This is the strongest team I have ever coached,” says Reichert. “They are truly dedicated to the sport and work hard to accomplish each element of the routine. “

The squad plans to attend five competitions this season, travelling to Athabasca, Edmonton, Calgary and Lethbridge.

This year, adds Reichert, the squad is competing in Game Day as well. This is a new competition which falls back to the traditional role of cheerleaders.

“The team will prepare an offensive and defensive cheer, a spirit cheer and a half-time dance,” explains Reichert. This was debuted at Provincials last year and we have decided to compete this year because it allows us to expand our repertoire.”

Another change for this year has seen the squad cheering for all Mustang football home games.

“This allowed the girls a chance to practice their cheers and be comfortable performing in front of crowds,” says Reichert. “It also allowed them to become more visible in the school.

“Thus far, our season has really been a great one.”

Thanks to the squad’s overall success, cheerleading has begun to pick up in the community. Reichert attributes that to the efforts of her team, both past and present.

“I have had a lot of former cheerleaders come back, whether it be to help part time, for a year, or go on to help the middle school team,” she says.

“Our choreographer, Hannah Watson, has created a challenging dance sequence both for our Cheerleading routine but also for our Game Day half-time dance,” says Reichert.

“Both Hannah and Hope are previous members of the George Mac team and it is exciting that they are back to help train new team members.

“In the big picture, cheer is two and a half minutes of your life. It’s what you do before that, and what you do with whatever happens after, that matters.” 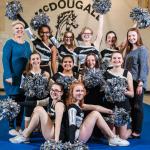 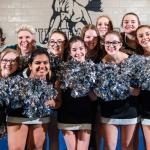 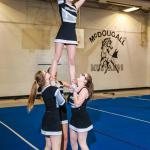 Airdrie teachers share the positive aspects of educating during a pandemic

This year our annual Ones to Watch feature focuses on eight very talented young women who are ready to ignite the world with their passions. Nominated by their teachers, each one of them offer a glimpse at a better world with their art in it.