City Calls for Caution at Crossroads

Photos by City of Airdrie

If you think you’ve noticed Peace Officer vehicles hanging around city intersections lately, you’re right, as the City of Airdrie’s Municipal Enforcement department has been focusing on intersection safety in January.

High-traffic intersections require drivers’ full attention, and can easily become an accident waiting to happen, especially in winter driving conditions. That’s the message from local Peace Officers, who have the authority under the Traffic Act of Alberta to issue traffic tickets.

Brad Tomlinson has been a Municipal Enforcement Peace Officer in Airdrie for nearly nine years and has seen more than his share of careless drivers – and accidents.

“We recognize accidents can happen at any intersection and approaching all intersections with that extra attention makes all the difference,” he says.

“A common driving habit in Airdrie that we have been focusing on is turning right on a red light. Many people fail to come to a complete stop at a red light prior to conducting their right turn, which poses a huge risk to pedestrians using the crosswalk. We also see a lot of vehicles coming into the advance turn lanes on a solid yellow light, the yellow is for vehicles to clear the intersection of vehicles already turning. If there is time to safely stop, vehicles must stop prior to entering the turn lane on a solid yellow light.”

The chart below shows collisions between two or more vehicles on Airdrie streets over the past five years. 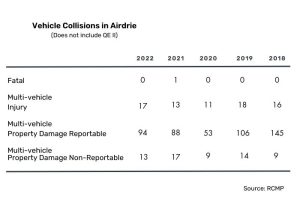 Rules of the Road

In a news release, the City recommends road users exercise caution when approaching intersections, including the following practices:

It can be hard to know what to say or do to give support to your loved ones who are going through infertility or infant loss. Airdrie company Hope Anchors is here to help make that question of “what do I do?” a bit less daunting.

Brothers Brad and Ryan Fleischer are releasing a new track called Ride that exposes their Canadian roots to anyone willing to listen.