The noise level in the conference room is rising. Colourful blankets are piling up on chairs, bolts of fabric rest against the walls, and balls of yarn are stacked four deep on a table to the side.

The “blanketeers” are attending their monthly meeting in donated space at an Airdrie car dealership. It’s a chance for the women to drop off their creations, learn new techniques, and enjoy each other’s company.

But this is no ordinary crochet club.

“So many are drawn here by the chance to make a difference in a child’s life,” says Kim Ferrier, a spokeswoman for the group.

Ferrier joined after a friend’s husband passed away suddenly in his early 30s, leaving behind two heartbroken children and their devastated mom. Ferrier wanted to help, but didn’t know what to do. Then she saw the boys receiving two blankets – handmade, colourful, cozy and comforting. A lifeline. A warm safe hug in sad and uncertain times.

She was hooked. A budding crocheter, she joined the little-known Airdrie Project Linus, a small but loving group of women –  armed with only needles, hooks, yarn and fabric – who provide blankets of love to children going through serious illness or a crisis in their lives.

In October, Ferrier helped the group secure a $10,000 donation from the 100 Airdrie Men Who Give A Damn (more on them in airdrielife’s summer issue). She was blown away. But more so by the stories the men shared after her presentation. One man cried. Another recalled his childhood blanket that was sewn for him by his grandmother. Ferrier says she’s never been hugged by so many men she doesn’t know!

Project Linus is a worldwide volunteer-run organization. It’s named after the Peanuts character who’s rarely seen without his trusty blue blanket. There are 44 chapters across Canada, six of them in Alberta.

The Airdrie chapter was started in 2011 by the Heslop family. Longtime resident Shirley Heslop found out about Project Linus through her daughter who lives in Washington State. At first, she took her blankets there, but soon saw a need right here in our own community.

Recently, blankets were gifted to the children who lost their home as a result of the Sharp Hill grassfire last October. Other recipients include a boy who underwent open heart surgery and his little sister; a father of three who was struggling and eventually had the heat shut off in their home; and another little boy with a terminal illness.

“His mother emailed to say that nobody can touch that blanket. He has it all the time, and it has been such a help,” Heslop recounts.

A year ago, there were six or seven blanket makers. Now, on a dark and cold winter’s evening, there are more than 30 crowded into the community room at Cam Clark Ford, quilting away, sipping coffee and chatting up a storm.

Becky Simmons, a local crochet master who sells her patterns online, is showing the women how to join their squares using a ‘continuous granny stitch.’ She stands at one end of the table, her crotchet needle pumping like a well-oiled machine, and she’s not even looking down at her work. As if by magic, a scalloped yellow border appears around a small brown square of yarn. Six such squares will be joined together following her cleverly-devised mathematical diagram to form another blanket hug for an Airdrie child.

The women – of all stages and ages – are free to make their own style of blanket. Tonight’s drop-offs are patterned with pink teddy bears, big yellow emoticons, and everything in between. Some 25 to 30 cuddle blankets are donated each month. And last year alone, the group gave out 300 blankets, each one a labour of love.

“Nothing goes to waste here,” says Leslie Gould, the chapter co-ordinator. “We are frugal – times three!”

Even when people donate blankets that don’t meet Project Linus’ needs (all blankets must be new, handmade and 100 per cent acrylic for ease of washing), the group works with schools, hospitals, emergency services, community and seniors groups to find homes for them.

Aside from blankets, the group gratefully accepts donations of fabric (especially fleece and flannel), yarn and quilt batting – one of their most expensive purchases.

Like the other group leaders, a part of Gould’s basement is given over to supplies and blankets – each carefully checked, lovingly finished, thoroughly washed, neatly packed, and individually labelled with an image of Linus – ready to go for the next child in our community in need of a warm loving blanket hug.

There’s no shortage of love. If you know a child who could use a Project Linus blanket, please email airdrieprojectlinus@gmail.com 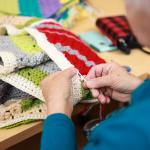 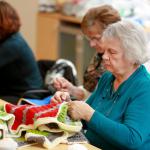 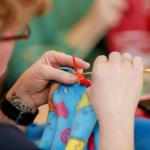 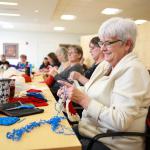 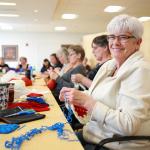 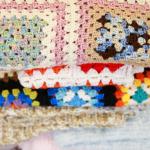 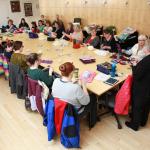 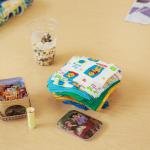 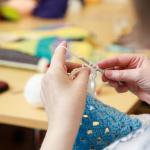 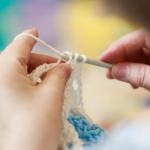 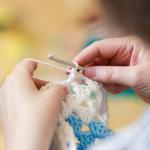 Speak up with Airdrie Discovery Toastmasters

Have you ever wanted to be a better public speaker?

2018 Awards of Community Excellence. With illustrations by Lia Golemba we salute Airdrians who go above and beyond and make us proud!

In the winter issue we featured male coaches and in our second part of our coaching feature we highlight three female coaches. After we had completed the interviews and photos, they were ALL nominated for the Amazing Airdrie Women Awards.