Local aviation enthusiasts have been meeting as a club for decades, but it wasn’t until the last year that the Airdrie Flying Club (AFC) became a formal society.

The club has about 40 members of all ages who share a passion for flying.

“It’s all about sharing an interest in aviation,” says Kyle Bialas, AFC board member, explaining not all members own an airplane, but many do.

These planes range from home-built kit airplanes to a state-of-the-art, single-engine plane with a glass cockpit, light twin engines and a few helicopters.

Much of the club’s action takes place at the Airdrie AirPark, located just outside the southeast city limits. According to Bialas, Airdrie’s airport has been around for decades, and was even used for training during the Second World War.

It is now a private airport and a landing site for many different types of aircraft. Within the last decade, it has hosted the Airdrie Regional Air Show (which has now moved to Springbank Airport), attracting thousands of visitors, and even received a visit from a Canadian Forces crew flying a Hercules.

Bialas says in 2005, AFC joined the Canadian Owners and Pilots Association (COPA), a Canada-wide organization with more than 200 regional and local chapters that was founded in 1952 with the mandate of promoting general aviation. The organization accomplishes this by raising funds and advocating for safety and accessibility for its members.

According to Bialas, AFC’s involvement in COPA allows members to network with other pilots, learn about activities and changes within the industry and support general aviation.

It also gives the local chapter a chance to get involved in the COPA For Kids Aviation Program, which introduces about 3,000 Canadian children, ages seven to 17, to general aviation each year by offering them flights in small planes.

Bialas says the annual event, which involves offering a free, approximately 20-minute flight to local children, is set to take place this year in late summer or early autumn.

The event has been taking place for more than a decade and volunteers like Bialas organize and host the activity. The owners of the Airdrie AirPark donate the regular fees associated with flying.

Being involved in the event has become a favourite activity for many AFC members, says Bialas, as it allows the seasoned pilots a chance to remember the magic of flying by watching a youngster experience it for the first time.

“As soon as a pilot has done it, they are hooked,” he says. “We are so used to flying that we forget that this is something special, and the expression that you get to see on kids’ faces is adorable.”

Bialas, who fulfilled a lifelong dream about seven years ago when he earned his pilot’s license, happily takes part in the COPA For Kids event. He says about 140 children from the Airdrie area take part each year.

He fondly remembers one little girl from the 2016 event who had an amazing flight and got off his airplane giddy and excited, eager to tell her mom and grandfather about her flight.

It was a touching moment for Bialas, who says “you could see a lightbulb went off in [the girl’s] head,” as she realized the possibilities.

According to Bialas, there are numerous anecdotes to be shared about the day, adding the range of emotions the kids exhibit is amazing.

He encourages local kids curious about flying in a small plane to take part in the COPA For Kids event to visit airdrieflyingclub.ca or visit the AFC on Facebook.

The dates for this year’s event will be posted on AFC’s website calendar later this summer.

AFC is also open to new members, notes Bialas. Monthly meetings take place the first Thursday of every month at the Airdrie AirPark from 7:30 to 9 p.m. Everyone is welcome to attend. 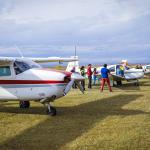 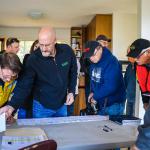 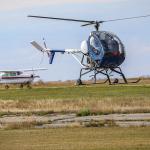 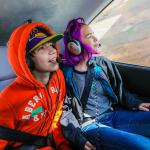 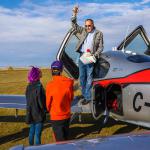 Justin Fedoruk picked up a whistle and striped hockey referee uniform before his 13th birthday as a way to enter the workforce. The following summer he hit the pavement as a lacrosse official. He says he enjoys officiating lacrosse more.

For the past few years we have highlighted graduating students who want to pursue the arts in this annual arts issue. We decided to turn the focus back to the people that helped get them there – the passionate, creative teachers at our local high schools.