The daily journey of our recycling

“Just watch what you put in your recycling bin. You know, pay attention and everything will run good.”

The blue cart at your curb is one of thousands picked up daily in Airdrie as glass, plastic, paper and cardboard make their way to becoming something new again.

It all starts when residential truck drivers like Wayne Meredith arrive at the GFL Environmental Inc. shop in Calgary before 6 a.m. each weekday morning, rain or shine, sleet or snow, holiday or not.

By shortly after 7 a.m. on a Monday in June, Meredith is at his first pick up in Reunion, watching the monitor high to his right displaying the view of his truck’s robotic arm and box.

His left hand is on the wheel while his right maneuvers a joystick, and thumb presses two buttons. He aptly likens his work to a video game.

“I can’t count how many times that joystick moves in a day,” says Meredith.

He gets out occasionally, like when he puts a note on a blue cart with golf clubs sticking out the top, a no-no, or to give a colouring book to some of his preschool fans. But for the most part, he stays behind the wheel, where his job description says he’s supposed to be.

Most days of the year he completes his route and unloads within about eight to nine hours, but winter driving conditions in rutted, icy alleys and Christmastime payloads can extend his shifts to 12 hours.

On this sunny day in June, he methodically moves along streets and alleys in Reunion, and then Sagewood, not needing a map to efficiently navigate to pick up bins at 1,100 households he’s been to hundreds of times in his more than two years of working in Airdrie for GFL.

“Today went smooth; everything was pretty kosher,” says Meredith while driving towards where he would unload the heavy truck at Cascades Recovery+, 50 kilometres away in southeast Calgary. 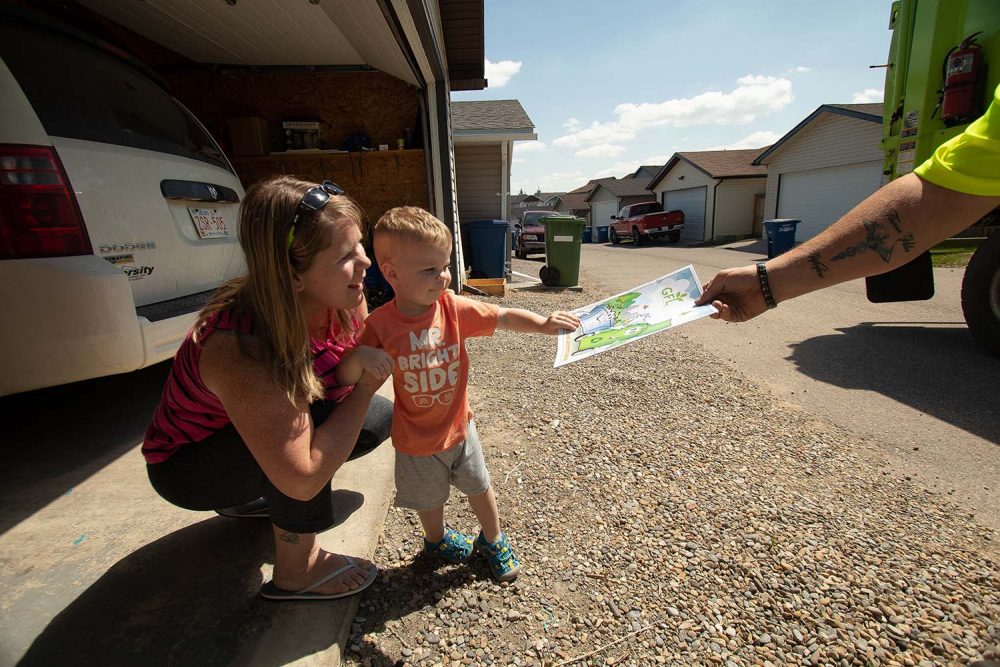 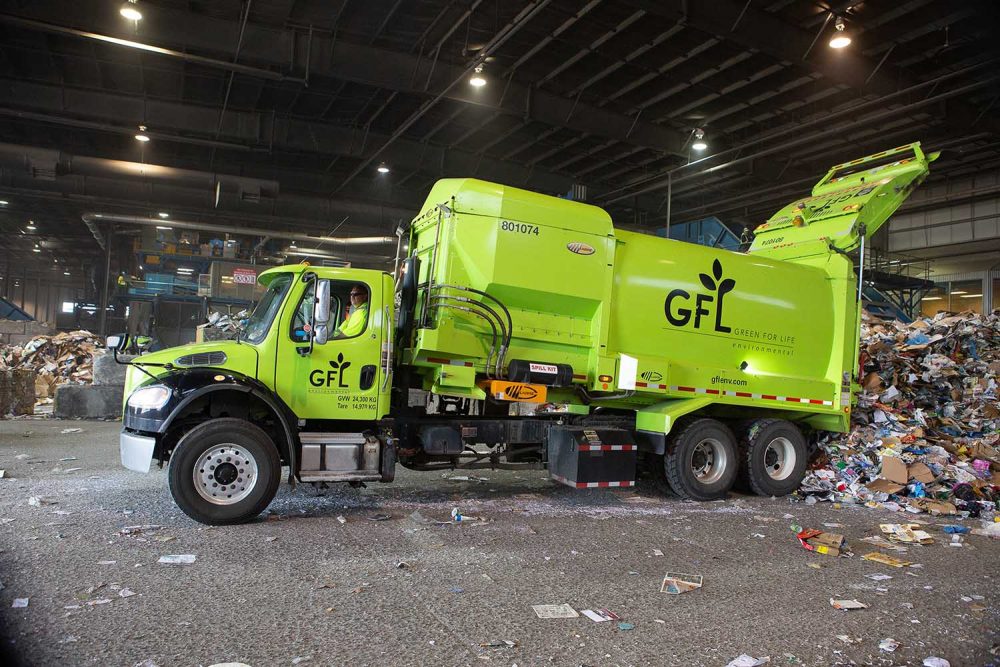 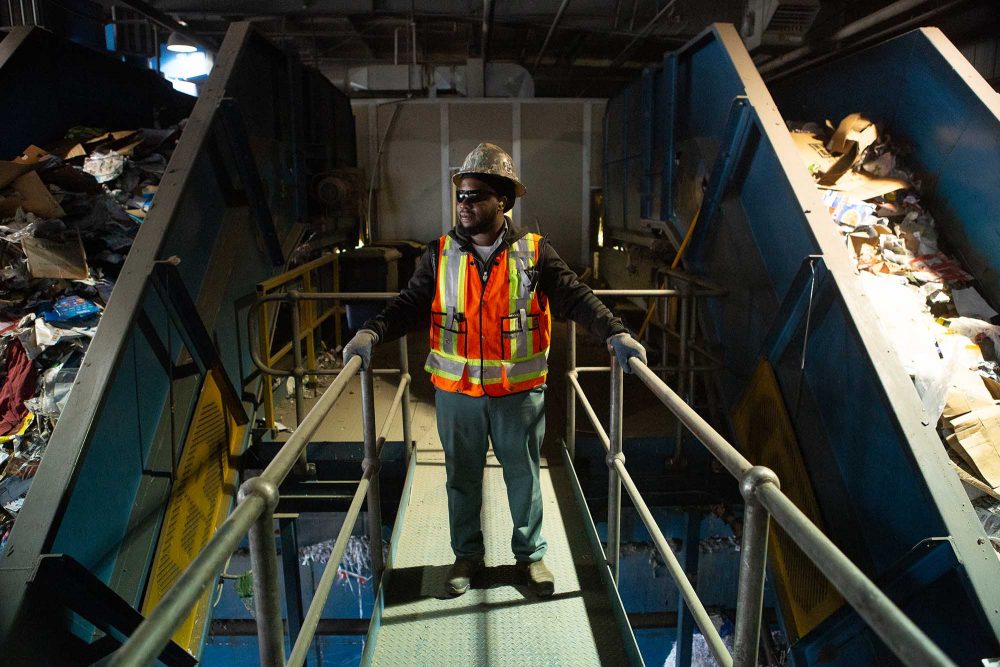 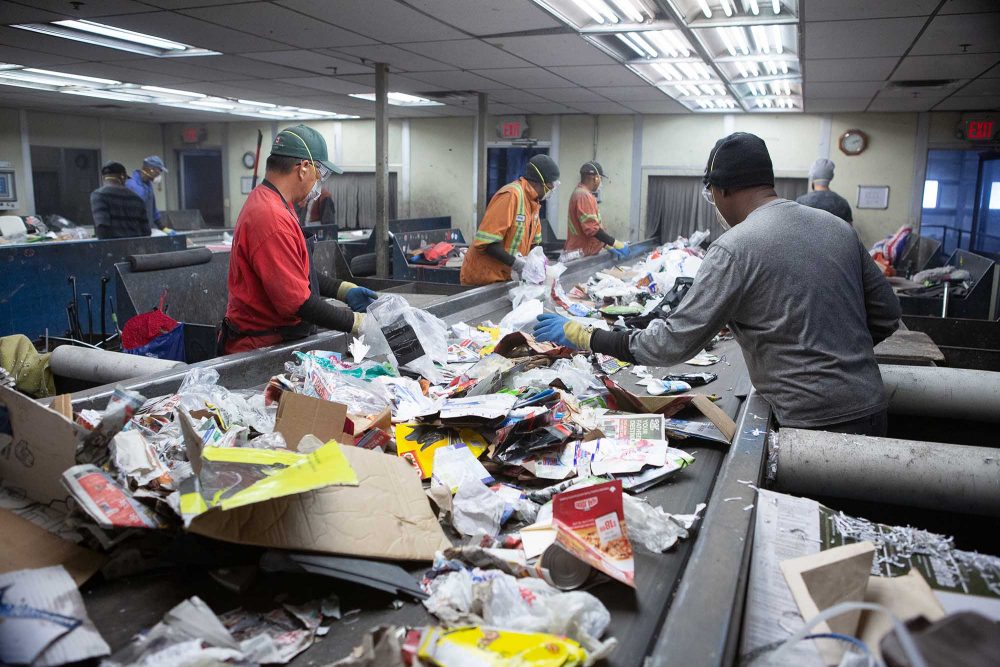 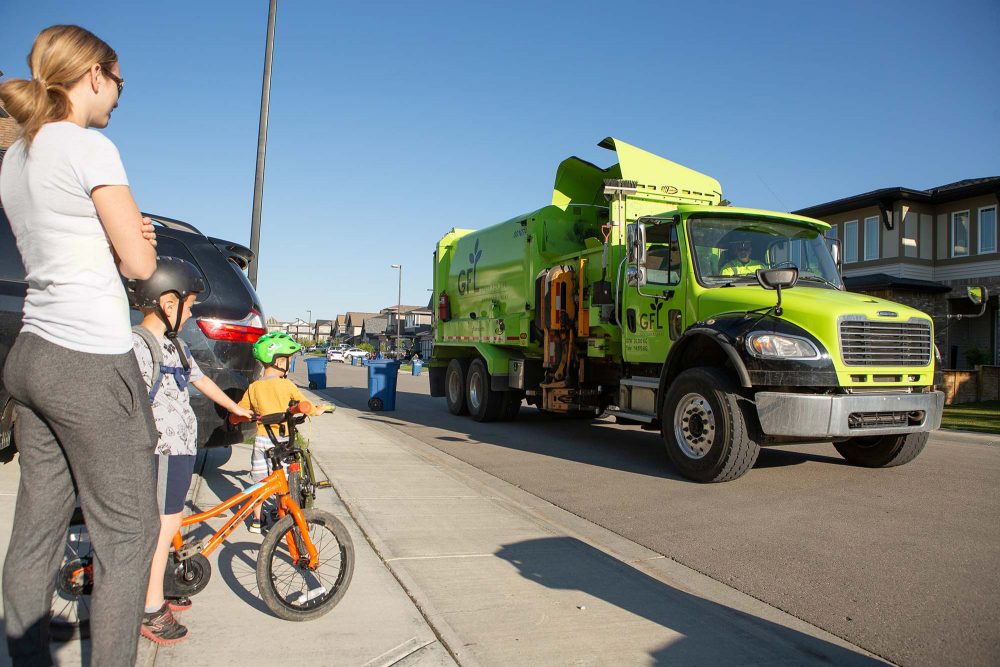 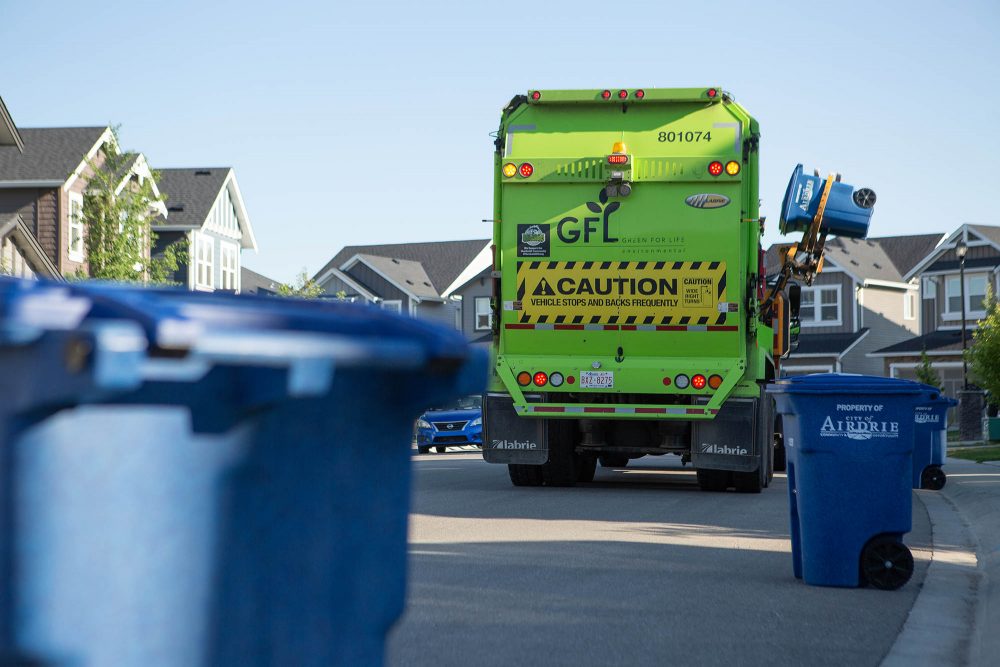 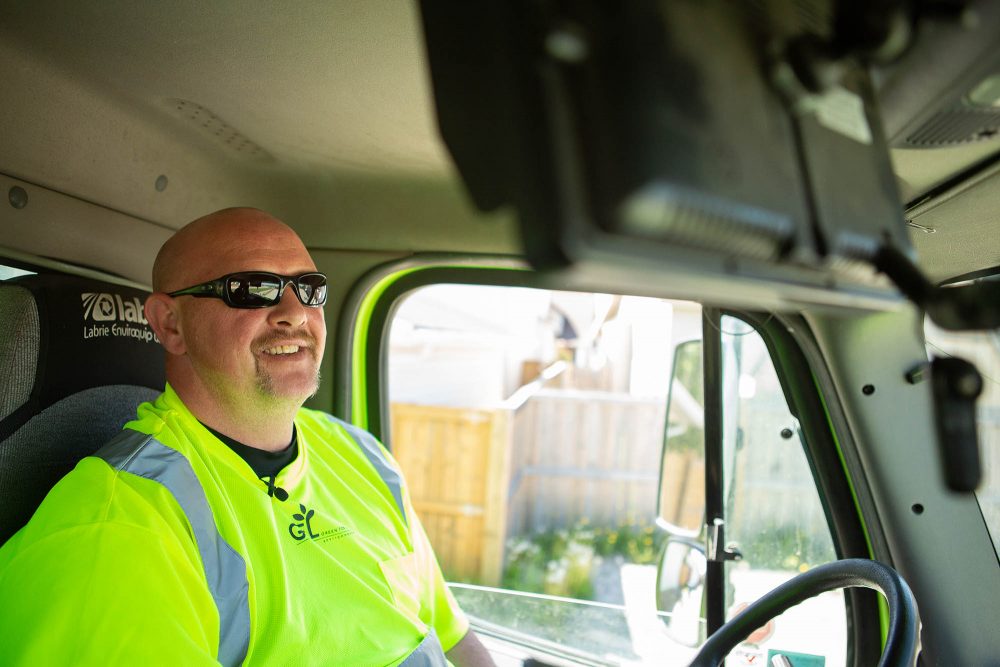 What do you want residents to know?

“Keep [carts] away from vehicles, fences, cable boxes,” says Meredith. “Just watch what you put in your recycling bin. You know, pay attention and everything will run good.”

He goes on to say he’ll clean up a spill if he makes it, but asks residents to not overfill their bins and to make sure the lid is closed. You can also help drivers out by breaking down and folding cardboard. This fits more in the blue carts, and makes it easier for trucks’ compactors to pack materials in.

He arrives at Cascades Recovery+, weighs in beside the large warehouse and dumps his load of recyclables inside at the base of a mountain of materials to be sorted.

He drives back to the GFL shop, completes his paperwork, checks over his truck to ensure it’s ready in the morning, and punches the clock before driving about 75 kilometres home to Carstairs, the final leg of his roughly 450 kilometre daily drive.

Now that your recycling has joined the tonnes of other products in Cascades’ large, industrial facility, operations supervisor Craig Lee and his team of 65 people, payloaders, huge conveyors, and sophisticated sorters, separate the materials into saleable cubes.

He’s in a large room upstairs at the warehouse with windows overlooking the staff and equipment sorting through 40 tonnes of cascading recycling every hour, 10 hours per day and often six days a week.

Earlier, during a tour of the facility, he pointed out two conveyor belts that lift the raw recycling from the floor, about three storeys up to the initial hand-sorting room.

About a dozen staff stand alongside the belts, dust masks on as they work towards their main objective – “to get the oversized, hazardous materials out of the system.”

“If you think about the facility with so much paper, so much flammable material, you really don’t want to have anything here that can be ignited.

“When you’re recycling, you just have to think about the other person on the other side of the fence, who has to take care of all that material.”

There are also garden hoses, which fit in a category of hazards called danglers. Other non-recyclable items make the first manned phase of the sorting process crucial and dangerous.

Lee recognizes people recycle with good intentions, but can be ignorant of “the hazards that they place in other people’s life.”

The week previous, one of Lee’s colleagues got pricked by a needle that was “filled with blood,” a scary circumstance. Medical waste such as needles can be disposed of at your local pharmacy without giving recycle workers an HIV or hepatitis C scare.

He urges residents to dispose of non-recyclable materials according to the specs of their city. Airdrie residents can research where questionable items go at: www.airdrie.ca/wheredoesitgo

The problem of loose bags messing with the sorting process can be solved by residents placing all their bags from a week into one bag in their blue cart. Otherwise, the bags float on top of other recyclables in the process and optical, automated machines can’t see what’s beneath, making the system inefficient.

When working properly, the optical machines quickly sort through varying grades of paper, plastic and cardboard.

In the paper stream, there is a fiber room with about 25 individuals on quality control.

Elsewhere in the streams of cascading materials, optical machines sort plastics, which are then stored for sale and shipment.

As a final step, each commodity is baled into cubes for easy transport.

A view from the City of Airdrie

Tracy Pagenhardt, program coordinator for the City of Airdrie, has toured the facility other times before she visited again in June.

“It’s certainly eye opening to see it through the facility itself,” saig Pagenhardt. “It’s very important to make sure that [household hazardous waste] is not in the blue cart.

“We do have the Eastside Recycle Depot, and we do accept the hazardous waste. So, your batteries, your propane tanks, your oil, your gas jugs, all that kind of stuff can come to the depot. It doesn’t belong in the blue cart.”

“If you don’t know what where an item goes, and you want to recycle it, visit www.airdrie.ca/wheredoesitgo,” said Pagenhardt. “You can type in exactly what it is that you have that you’re looking to recycle, and it’ll pop up with an answer [of where to take it]. If it’s a material that doesn’t come up in that tool, certainly give us a call, or visit us at the depot. We’re more than happy to help.”

Who pays for recycling?

Pagenhardt explained that Alberta residents currently pay for the processing of recyclable materials through their utility bills or other methods.

However, Pagehardt said extended producer responsibility (EPR) is implemented in just about every other province in Canada except for Alberta.

EPR passes costs for processing recyclables into marketable materials on to the manufacturers of the packaging.

“If they’re making this stuff, and they have the responsibility to then process it, and then to market to find an end market for this material, they’re going to have more of a desire to ensure that that material is marketable,” said Pagenhardt.

This would reduce cost for residents and change the contents of your blue cart.

Pagenhardt said municipalities like Calgary have begun the initial research into implementing EPR.

“I would definitely encourage residents to take a look at it,” she said. “Have a full understanding of what it is, what it looks like and the benefits to the municipalities.”

Residents with more questions can contact Pagenhardt by email at Tracy.Pagenhardt@airdrie.ca or phone (403) 948-8800.

The Recycling Council of Alberta is doing direct work on EPR, and can be reached at info@recycle.ab.ca.

For a more detailed story and extra info from the City of Airdrie, visit airdrielife.com

The 1928 Nose Creek Bridge to the Elevators

Hail to the deputy chief