In the winter issue we featured male coaches and in our second part of our coaching feature we highlight three female coaches. After we had completed the interviews and photos, they were ALL nominated for the Amazing Airdrie Women Awards (see story here).

“It’s a lifelong skill for everything, not just for soccer, to learn mindfulness and … how to be resilient when you’re faced with trauma or stress or things that don’t go so well”

Soccer coaches Shelley Armitage and Ellisa Podemski play off each other like they’re sisters, but the two met far more recently.

Both with sons in the Airdrie & District Soccer Association (Airdrie Football Club), the two met and started coaching together four years ago, and followed their oldest boys up to be coaching the U11 boys last summer and fall (now U12 during the winter indoor season).

For Armitage, soccer is her sport of choice. 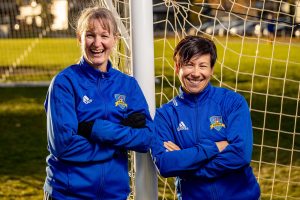 “I’ve always loved the game,” says the coach and player. “Luckily the boys both wanted to play it. I was quite happy to give them some support in that area.”

Armitage says the two coaches feed off each other, as Podemski brings a background in adult learning techniques, team bonding and wellness.

“We just blend that together to make a kind of a well-rounded offering,” says the engaged parent.

“Our goal is to never be the last coach for a player,” she says. “We never want to have a player leave us and decide to leave the sport because of the experience they’ve had with us.”

Helping the young players focus is her game.

“I just think it’s a lifelong skill for everything, not just for soccer, to learn mindfulness and to learn how to be resilient when you’re faced with trauma or stress or things that don’t go so well,” says Podemski.

As for coaching their own kids, they’ve worked it out.

“We have an arrangement that I coach Ellisa’s son, and she coaches my son more, because sometimes that role of coach/mom doesn’t go over that well,” says Armitage with a laugh.

Vanessa Bellegarde is a sweet-but-fiery role model to all who set foot in the Airdrie Martial Arts Centre. 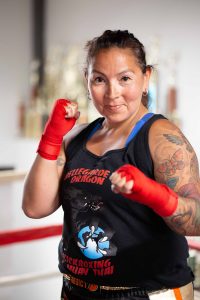 Last summer, after a busy day of running a kids’ camp for her Lil Dragons program, Bellegarde sat down for an interview in the upstairs boxing ring in the gym she co-owns with her husband Luis Cofre. Behind her is a mass of dozens of trophies on the shelf of the landing, most of them hers.

At 14 she was introduced to muay thai at Mike Miles Muay Thai in Calgary. Between the ages of about 19 to 24 she competed on weekends while training and working as a chef. She amassed Canadian and North American titles, which led to her winning the 1999 world title in muay thai. Sadly, she was forced to retire six months later due to a bad knee injury at age 24.

The descendant of Sitting Bull left her 26-3-2 record behind, and continued her trade as a certified chef, married Cofre two years later and started a family of two kids, Ocean and Oscar. But Bellegarde got the itch to return to muay thai.

“I had this idea,” says Bellegarde. “You see all these like after school programs, but they’re not active, right?”

So she started Lil Dragons after-school programs to fill that void of activity.

“This is our third gym, and [membership] keeps tripling every time,” says Bellegarde. “You see the growth rate and not just physically, but like mentally and emotionally. Right their attitudes. It’s pretty amazing the results of kids and adults.”

Airdrie Knights of Columbus give back where it counts

The Airdrie Knights of Columbus has donated hundreds of thousands of dollars to local charities over the past 38 years.

In 2018, eye-catching new arts and culture projects are continuing to add vibrancy to our city.

These kids are so AWESOME!

It’s our second year of celebrating awesome kids in our city and we have nearly doubled our awesomeness thanks to an eclectic and electrifying group of young people who exemplify the best of Airdrie’s youth.