“I just love coaching I love seeing the kids smile, having fun and winning.”

A handful of youths take advantage of an optional Thursday evening Youth Bowl Canada practice in late March. The season was done for all but one 10-year-old girl, Hermionie Daling, who was prepping for nationals in Oshawa, Ont. from May 5-7 (where she went on to place silver with Team Alberta in the five-pin girls trios event, and seventh in the bantam girls singles).

Halvorson shares the story of a deal made four years ago when Daling first picked up a bowling ball in the basement alley near East Lake.

“We had an instant bond,” says Halvorson. “She clung on to me and I could just see it in her she wanted to bowl.

“We made a deal back in the day, that if she made singles [nationals]…We would get her a proper bowling bag to carry her balls into that nationals, and I would also go with her and be in the stands for her.”

Daling’s route to win the bantam girls singles provincial title included a rally back from third place after the step-ladder tournament, beating the second-place opponent in the playoff, before facing the incumbent in November 2018 in the provincial singles tournament. 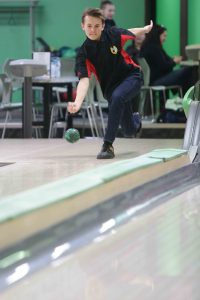 Being the challenger, she had to beat her opponent twice, and did, winning the final game by a healthy 23 points.

“I just kept on taking deep breaths and just kept on throwing strikes,” says Daling. “One dream in my life is me going to nationals in junior and senior and maybe bowling when I’m an adult.”

The tuckered 10-year-old declines an interview after flying home from bowling 22 games in three days, but her mother Amanda is happy to talk.

“She’s very proud of herself and she should be,” says Amanda, noting the trio of her daughter, Natalya Langevin and Teagan Makar had an uphill battle in the final two rounds.

They battled back from eighth place after playing three of the five games in the trio event. They were in fourth after round four, and bowled a 192 (Daling), 288 (Langevin) and 268 (Makar) in the final frame to earn silver.

Halvorson’s goal is to get more kids involved in her beloved sport.

She wants to see the youth, including her own 13-year-old daughter Tanisha, grow in confidence and believe “they can do what they set their mind to.”

“Our goal is to get them to succeed,” she says. “I just love coaching. I love seeing the kids smile, having fun and winning.”

They want to see the all-ages sport continue to grow in an alley lined with nearly two-dozen banners from provincial titles and a handful of pictures from national title winners over the last few decades. Last season was positive, with many top-three finishes by Airdrie players in tournaments around the province.

Tanisha is animated while throwing strikes and as she sits down during her interview.

She says she would be a different person if it wasn’t for bowling.

“It’s all about your mood; your mood changes the game a lot,” says Tanisha, who holds a higher-than-200-point average, defends her sport of choice.

“Most people don’t really see five-pin bowling as a sport,” she said. “But, once you get used to it, then you see that it’s more competitive as you go.”

She laughs as she holds and describes a plush, knitted cartoon-looking bomb, complete with a fuse. 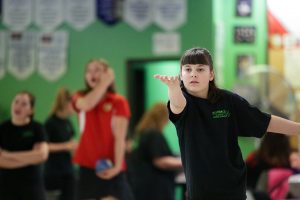 “If I’m getting mad, then I can go to my bowling bag and like squish it or throw it to the ground, and so it’s kind of like I’m dropping an f-bomb,” says Tanisha. “It always changes my mood because I start to laugh, and I just bowl a lot better with it.”

“I’ve learned to be patient,” says the youngest girl at the practice in Shamrock Lanes that night.

Theron Makowski, 13, has learned to cope with stress.

“I just think it helps if I keep myself calm, and be in a better mood to keep myself positive,” says Makowski.

He wants other youth to join him at the bowling alley.

Halvorson says kids can bowl for free during the summer, and parents can sign up at kidsbowlfree.com.

Airdrie’s female midget elite AA team forms a sisterhood on the ice and off. Airdrie’s midget AA female hockey players are proving to be strong contenders in their second season.