In our first year we didn’t have a category for Amazing Courage, but it became evident by the nominations we were receiving that it was an important category to create.

It became very poignant when Tracy Work, nominated in our first year for her grace and courage while battling breast cancer, passed away shortly after the awards.  Since we had just created the new category, I asked Tracy’s family if we could name the Amazing Courage Award in Tracy’s honour. They graciously said yes. Tracy’s mom Doreen and daughters Emma and Kayla have attended the awards every year and we are honoured that they choose to do so.

The very first recipient of the Amazing Courage Award was Jody Yakubowski and sadly, we lost her this past November. Jody was the epitome of courage and lived her life to the fullest despite so many setbacks in her health.  I like to think we now have two guardian angels watching over the Amazing Airdrie Women. 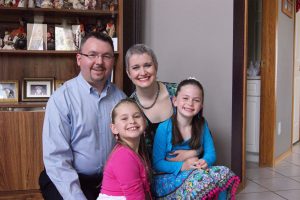